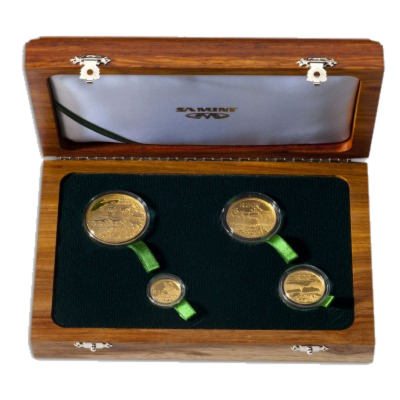 The Natura Prestige Set consists of four 24 carat gold coins (1 oz, 1/2 oz, 1/4 oz and 1/10 oz) packaged together in a box made from either “Kiaat”or “Imbuya” wood. In addition each set has a plaque featuring the name “Natura Prestige Set” as well as the year “2012” and the individual number of the set. Each set issued has an individually numbered Certificate of Authenticity.

On the reverse of the R100 (1oz) Natura coin, two adults are shown patrolling the pack’s home range. These slim, long-legged hunters are great roamers and need large territories. These territories vary in size depending on the number of pack members and the nature of the terrain. Due to human encroachment on their natural territory, there are only a few free roaming wild packs in existence which live outside the protection of national parks and reserves.

The reverse of the R50 (1/2 oz) Natura coin portrays an alpha female and her pups, protecting them while the others are hunting. Pups are the center of attention and all pack members take part in their care, feeding and protecting them until they are old enough to hunt.

The reverse of the R20 (1/4 oz) Natura coin portrays two hunters feasting on their prey.  These slim, long-legged carnivores collaborate as a team to chase and wear out their prey, once exhausted the antelope is killed fast and efficiently. After a successful hunt, the returning pack members are greeted with characteristic chirping sounds by those who remained at the den and will regurgitate meat to feed the dominant female, the pups, and other pack members.

The reverse of the R10 (1/10th oz) Natura coin portrays an alpha female.  The oldest female and oldest male having alpha status over their offspring and siblings. Typically only the alpha pair breeds and after a gestation period of two and a half months, a litter of seven to fourteen pups is born.  They remain underground in the burrow for the first two months of their lives. The pups are the center of attention and all pack members take part in caring, feeding and protecting them. 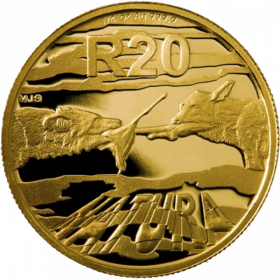 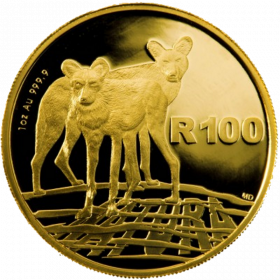 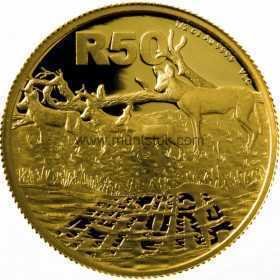 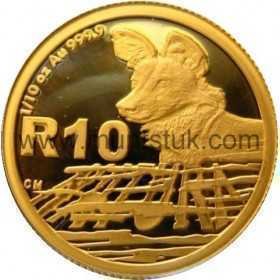