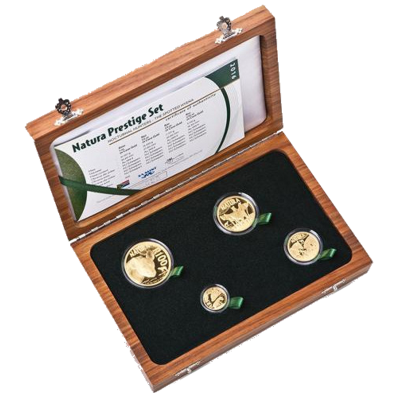 The Natura Prestige Set consists of four 24 carat gold coins (1 oz, 1/2 oz, 1/4 oz and 1/10 oz) packaged together in a box made from either “Kiaat”or “Imbuya” wood. In addition each set has a plaque featuring the name “Natura Prestige Set” as well as the year “2016” and the individual number of the set. Each set issued has an individually numbered Certificate of Authenticity.

A new theme in the Natura coin series, ‘Nocturnal hunters’, was introduced in 2014. The first predator to feature on the coins was the leopard, followed by the black-backed jackal in 2015. The year 2016 sees the final addition to this theme: the spotted (or laughing) hyena (Crocuta crocuta).

The hyena has an extensive vocal range: whoops, fast whoops, grunts, groans, lows, giggles, yells, growls, soft grunt-laughs, whines and soft squeals. Its loud ‘who-oop’ call and its unusual laughter are one of the most recognizable sounds of the African bush at night. The pitch of the laugh indicates the hyena’s age, while variations in the frequency of notes convey information about its social rank.

The reverse of each of the four pure-gold coins depicts a different aspect of the hyena’s behavior.

The R100 (1 oz) coin features a lone adult hyena, the word ‘Natura’ and the denomination ‘R100’, with the metal value ‘1 oz Au 999.9’. Hyenas can run at speeds of up to 60km/h and have good hearing and sharp eyesight at night. The female is larger than the male and dominates the pack. There is a very strong hierarchy, especially when they are feeding.

The R50 (1/2 oz) coin depicts a pack of hyenas out on a hunt. The spotted hyena hunts in small packs, seeking out weaker members in a herd of antelope. Once the prey has been selected, the pack separates it from the herd and chases it down over long distances. Also shown are the word ‘Natura’, the denomination ‘R50’ and the metal value ‘1/2 oz Au 999.9’.

The R20 (1/4 oz) coin portrays a pair of feeding hyenas. Although primarily a hunter, the hyena also scavenges. The word ‘Natura’ and the denomination ‘R20’, together with the metal value of the coin (‘1/4 oz Au 999.9’), complete the design of the coin.

The R10 (1/10 oz) coin illustrates a female hyena with her cub, together with the word ‘Natura’, the denomination ‘R10’ and the metal value ‘1/10 oz Au 999.9’. The average litter consists of two cubs, born after a gestation period of around 110 days. Cubs are born with soft brownish-black hair and develop the lighter-coloured spotted coat of adults after two to three months. The milk of the spotted hyena has the highest protein content of any terrestrial carnivore and a fat content second only to that of the polar bear and sea otter.

The common obverse features a ‘laughing’ spotted hyena and the words ‘South Africa’ and ‘2016’. The moon, which represents the nocturnal habits of this carnivore, is repeated on each coin, visually linking the four coins.