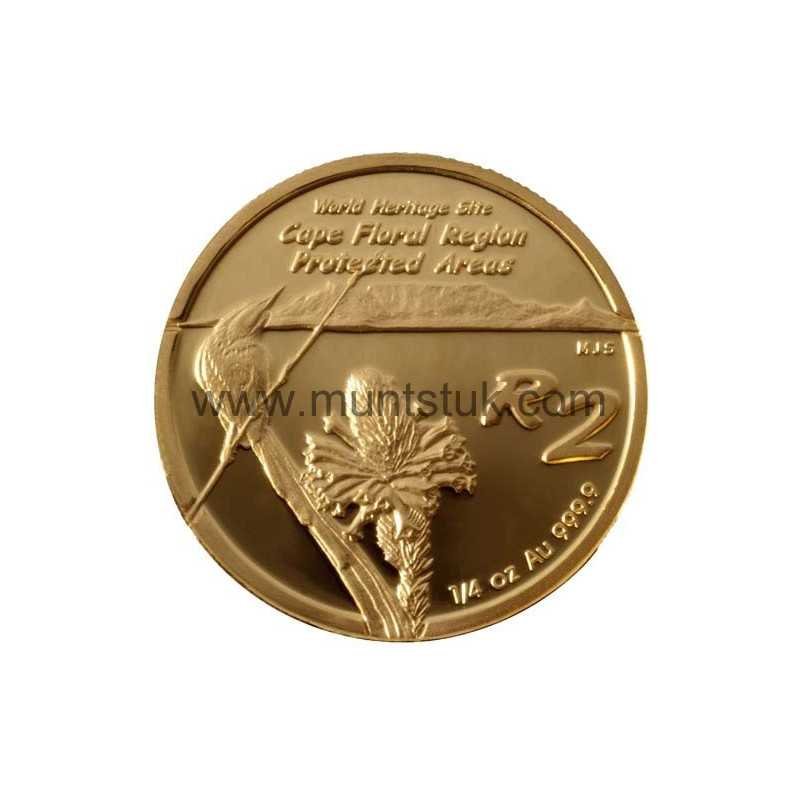 The sixth Heritage Site to be featured in the gold commemorative R2's current theme "South African World Heritage Sites" is the Cape Floral Region Protected Areas which was proclaimed in 2004. This Heritage Site comprises of eight protected areas stretching from the Cape Peninsula to the Eastern Cape, an area of 553 000 hectares, and home to nearly 20% of the continent's flora. Its plant species diversity, density and endemism are among the highest worldwide and it has been identified as one of the world's 18 biodiversity hot-spots. Of the 9 600 species of vascular plants found in the Cape floral kingdom, about 70% are endemic. The area's freshwater and marine environments are similarly unique, with plants and animals adapted to highly specialized environments.

The reverse of this R2 (1/4 oz) pure gold coin shows a view of Table Mountain across Table Bay, the Cape Sugarbird and an example of the beautiful "Fynbos" found in this Heritage Site. The official South African coat of arms, the year "2007" and "South Africa" is depicted on the obverse.
The accompanying 1/4 oz pure gold medallion, features the King Protea, South Africa's national flower, on the reverse and Table Mountain on the obverse.

Embedded in the lid of these Special Launch Sets, each uniquely embroidered artwork was created and sewn by a local woman from the Kaross Workers Project. This dynamic embroidery project in the Tzaneen area of Limpopo, enables almost 900 local people to earn a life-saving income. Embroideries from this Project are exhibited in galleries in South Africa as well as the UK, USA and Germany.