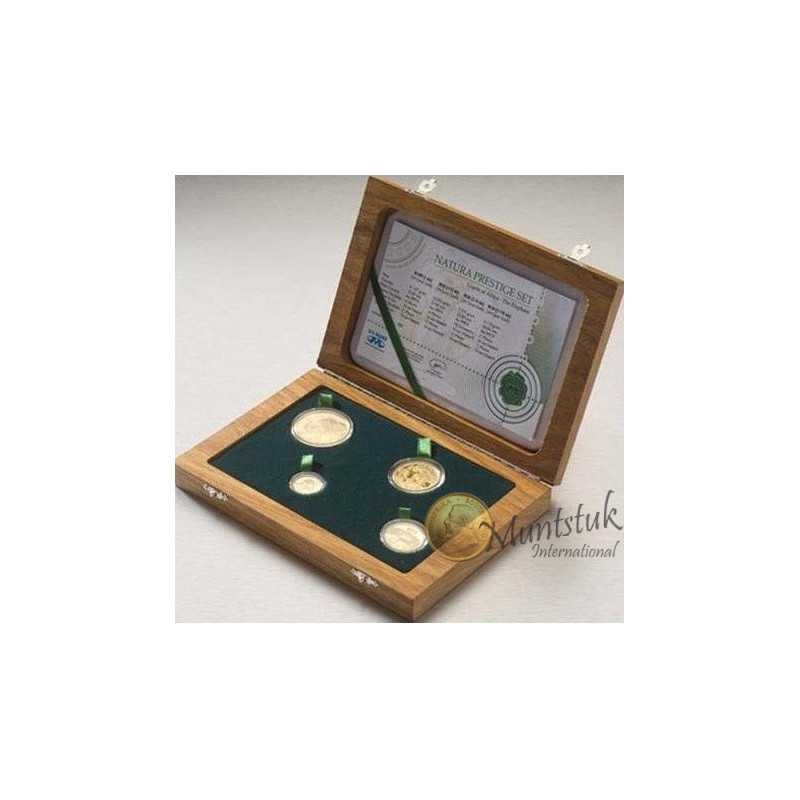 The Natura Prestige Set consists of four 24 carat gold coins (1 oz, 1/2 oz, 1/4 oz and 1/10 oz) packaged together in a box made from either “Kiaat”or “Imbuya” wood. In addition each set has a plaque featuring the name “Natura Prestige Set” as well as the year “2008” and the individual number of the set.

The African Elephant (Loxodonta africana) features on the 2008 pure gold Natura coin series as the last of the “Giants of Africa”. This coin series began in 2005 depicting “The Hippopotamus” as the first African giant. The second giant was “The Giraffe” in 2006 and the third in 2007 was “The Eland”.

The four Natura coins (1 oz, 1/2 oz, 1/4 oz and 1/10th oz) share a common obverse design which depicts the portrait of a matriarch. It is interesting to note that family groups are lead by a mature cow and not by a bull elephant. Different characteristics of elephant behaviour are featured on each of the reverses of the four Natura coins. Creating a visual link between the coins is the silhouette of a family group portrayed on both sides of each coin. These magnificent creatures continue to roam throughout Africa, but remain under threat from poaching and habitat loss. Although poaching of elephants for their ivory has declined since the 1989 "ivory ban", it remains a widespread problem in west and central Africa. A more long-term threat to the species, however, is the reduction of habitat available to elephants in the face of expanding human populations. Conservation organizations and governments are addressing these issues in order to conserve the African elephant and diminish the factors that threaten them. Elephants are unique within the animal kingdom. The African elephant is the largest living land mammal and its most notable feature is its trunk which serves as a nose, hand, extra foot, signalling device and tool for gathering food, siphoning water, dusting and digging. Both male and female elephants have tusks which interestingly show that elephants are either right or left “handed” by wearing down and using one tusk more than the other. They use their tusks for fights and for marking, feeding, and digging. Their characteristic large ears allow them to radiate excess heat. The other notable feature is the close-knit family groups of related females and their young lead by a matriarch. The members closely interact and fiercely protect each other; they lavish loving care on baby elephants and care for wounded individuals. Elephants are also unique in that they identify and look after elephant bones. Throughout the world the elephant is a symbol of strength, power and wisdom, as well as kingship and loyalty. These intelligent animals are venerated by many people as they exhibit characteristics which we as humans can identify with.

The Prestige sets are limited to 800 sets.
The Natura Prestige Set consists of four 24 carat gold coins (1 oz, 1/2 oz, 1/4 oz and 1/10oz) packaged together in a box made from either “Kiaat”or “Imbuya” wood. In addition each set has a plaque featuring the name “Natura Prestige Set” as well as the year “2008” and the individual number of the set. Each set issued has an individually numbered Certificate of Authenticity. This Certificate of Authenticity guarantees the quality and authenticity of the coins made by the South African Mint Company.