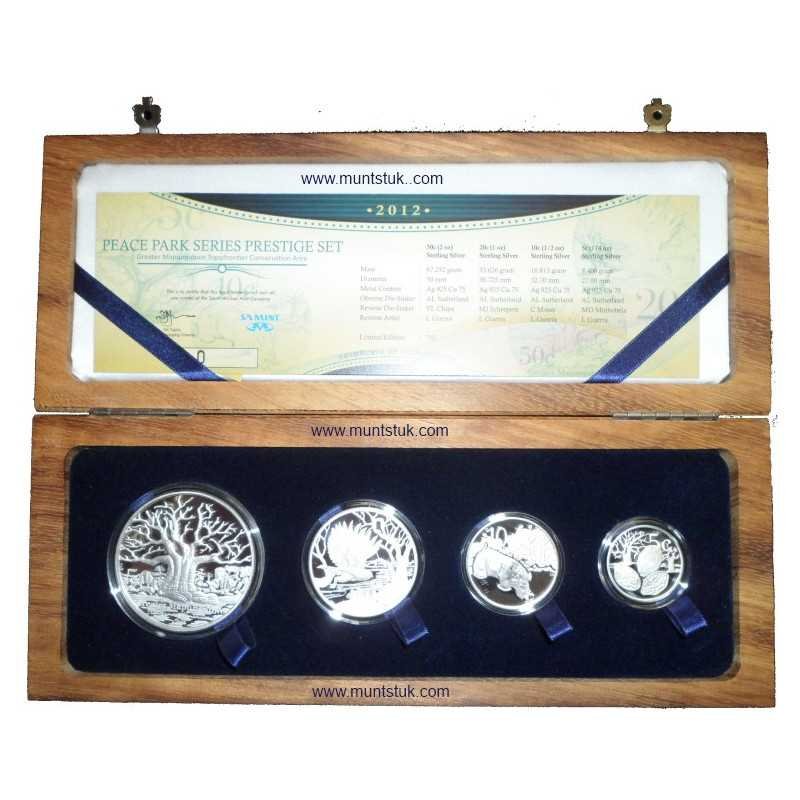 The Silver Series features the Greater Mapungubwe Transfrontier Conservation Area (TFCA) consists of the sterling silver coins (50c, 20c, 10c and 5c) packaged together in a wooden box which is made from an indigenous South African wood called “Emboya”.

The 2012 Silver Series features the Greater Mapungubwe Transfrontier Conservation Area (TFCA) as part of its current theme, peace parks of southern Africa. The area is a national treasure given its enormous historical and archaeological significance as well as the abundant biodiversity that exists in this ecologically sensitive landscape. Situated at the confluence of the Limpopo and Shashe Rivers, the Greater Mapungubwe TFCA encompasses areas in three countries - Botswana, South Africa and Zimbabwe.

The Greater Mapungubwe TFCA (originally named Limpopo/Shashe TFCA) was created in 2006 through the signing of the Memorandum of Understanding by the Environment and Tourism Ministers of these three countries. The establishment and development of peace parks allows for the joint management of natural resources across political boundaries. This unique partnership between governments and the private sector focuses on the co-existence between humans and nature and conserving biodiversity, thereby promoting peace, prosperity and stability for generations to come.

Various characteristics of this peace park are shown on the reverse sides of the four sterling silver coins. The 50c (2 oz) coin features the magnificent Baobab Tree, also referred to as the Tree of Life or the Upside-down Tree as it looks as though the Gods planted the tree with its roots sticking out.
The rare Pel’s Fishing Owl (Scotopelia peli) is depicted on the 20c (1 oz) coin and represents the sensitive natural balance which needs to be maintained to ensure the survival of Africa’s wildlife.

The peace park is home to lion, leopard, cheetah, rhino, spotted hyena and a large population of elephant. It offers sanctuary to hippos, crocodiles and a number of indigenous fish species. 350 bird species have been recorded and numerous ungulates, including the eland, duiker, impala, zebra, giraffe and blue wildebeest exist in this unique habit. The 10c (1/2 oz) coin represents the cultural heritage of the Limpopo-Shashe basin by showing the renowned Golden Rhino discovered at Mapungubwe Hill in South Africa. This site is probably the oldest modern capital city in Southern Africa with approximately 5000 inhabitants at its peak in ±1,100 AD. The inhabitants of this kingdom left behind archeological treasures like gold, copper and iron artifacts typical of the Iron Age, glass beads and pottery shards. There is evidence that they traded with cultures as far away as China, Egypt, India and East Africa. This unique area was proclaimed a World Heritage Site in July 2003. On the 5c (1/4 oz) coin the seed pod of the Baobab Tree is depicted. It is a food source for both humans and animals alike. The beautiful sandstone rock formations of this unique landscape link the four coins.

Product Details
SIL-PRE-PP12
7 other products in the same category:

Limited Edition: 500 for each series In 2006, the South African Mint Company entered into a joint project with the Endangered Wildlife Trust (EWT). The Mint has created a special 15-piece sterling silver medallion set, called “The Natural Heritage Prestige Set”.  A very special wooden box has been developed to house these beautiful 15 medallions.

The Peace Park Series Prestige Set consists of the sterling silver coins (50c, 20c, 10c and 5c) packaged together in a wooden box which is made from an indigenous South African wood called “Emboya”. The Cape Griffon Vulture which resides in the Maloti Drakensberg Transfrontier Project features on the lid of the box. Each set issued has an individually...